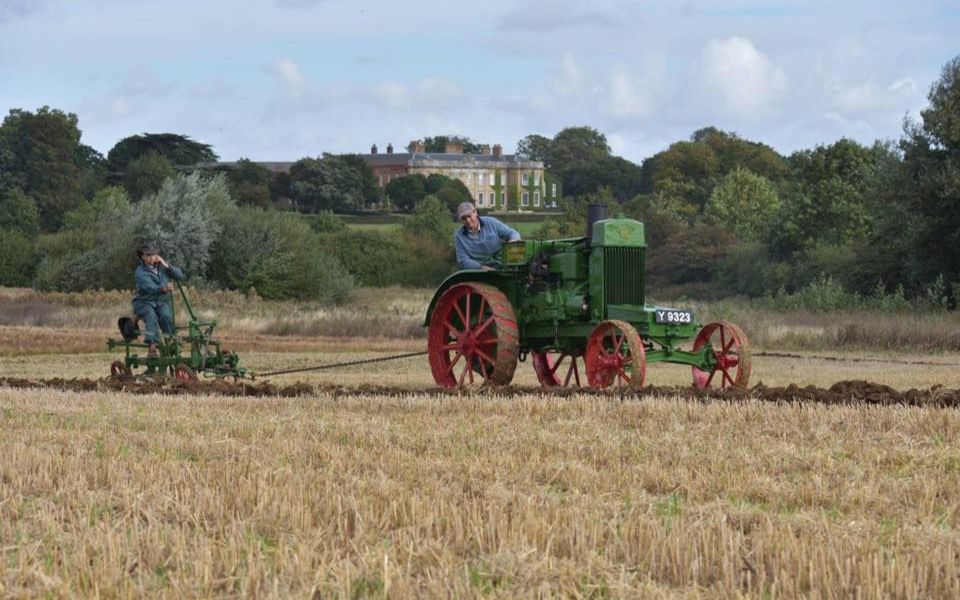 At last I can say I have virtually completed the restoration of my Allis ED40.  I had wanted a little diesel tractor for road runs, etc. as my Farmall M didn’t like running at tick-over speed in top gear and made some runs awkward and frustrating.  So, when I was offered the Allis, I was ready to take it on but it was in a pretty sorry state.
The wings were hanging in shreds although the rest of the tin wasn’t bashed about; the steering was all loose; the brakes didn’t work, and what wasn’t red rust was Fordson blue.  I think some previous owner had wanted a Dexta – but it did run – just!

Since then a slow and painful restoration has taken place in my shed.  The wings were impossible to replace with new or secondhand and had to be knitted back together with patches and ribs by Neil, a work of art if ever I saw one.  The steering bearings were also impossible to find so Pete and Geoff machined the casing to accept a different size and now it's working fine.  Hours were spent scraping off the rust and blue paint.  The brakes were freed off although I couldn’t get the shoes out to replace the liners.  Perhaps someone knows how?  I couldn’t get the pivot pin out of the front axle either.  The front grill was remade by Steve, from an old ironing board – again, a work of art.

Gradually the painted parts began to be re-assembled and some things made me scratch my head, after all it was 3 years ago when I pulled it to pieces.  It’s not just where they go but in which order.  Several times I had to take parts off to put bits on that I thought I could do later…but couldn’t.

I was getting to the point about 6 months ago when I was thinking about tax and insurance: obtaining insurance by using the serial number was very easy.   I also joined the Allis Chalmers club about this time for £10 pa.  Getting the tractor registered and taxed however was an entirely different matter.  With no paperwork and absolutely no idea of its previous registration number if it ever had one, I had to start from scratch.  To cut a long story short, after much V form filling, a letter from the Chairman of the Allis club to convince them of the year of manufacture and a fee of £55 I now have an age-related number, the registration documents and tax disc and a set of aluminium number plates from Elstow Radiators for £30.

Now, will it start?  Yes and no.  It did eventually with a well charged battery and blow lamp aimed at the air inlet.  The first run discovered wonky steering, no brakes, fuel leaks and a massive oil leak!  The tractor had to come in half to replace the rear oil seal on the crank shaft: my good friend Neil came to the rescue.  Most problems were now sorted so I took it to the Haynes Rally.

Taking most of the charge out of the battery it started at Neil’s place, only to stop in Dawes Garage in Shillington where it refused to start again.  I jump started it from some kind local with leads and a pickup truck and then made it to Haynes where it remained as a static exhibit until I put it on Pete’s dynamometer where it roared its’ heart out until the paint on the bonnet started to blister (supposed to do it good?), I shut it down to tick over and let it cool off.  The tractor ran quite well on the way home via Offley and knocked along at over 20mph.

Next job was to put the transfers on.  A job you can’t afford to muck up at £90 per set, so I was particularly careful and the tractor looks more finished for it.

With some rushed temporary repairs to the fuel return pipes, (thanks Steve), I used the tractor on the Christmas 2009 Road Run and it ran well.  I think I can now say ‘job done’ – what’s next?

Want to join us?

Please do not use our photographs without permission. Thank you.